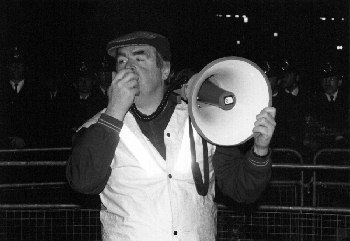 Goaded on by the management at News International, some 6000 British Trade Unionists from the stable of newspapers owned by the company went on strike on 24th January 1986. The company was seeking a legally binding agreement at their new plant in Wapping which would incorporate flexible working, a no-strike clause, new technology and the abandonment of the closed shop. There had been months of protracted negotiation and an agreement was all but in sight, but News International had long decided on a path of confrontation rather than negotiation and needed cash to fund its acquisition of Fox in the USA. Immediately after the strike was announced, dismissal notices were served on all those taking part in the industrial action (and some who weren't). With an almost military precision, the company promptly replaced the workforce with members of the EETPU Trade Union, put in place a Union-free distribution channel with TNT, and transferred its four major titles (the Times, the Sunday Times, the Sun and the News of the World) to the Wapping plant. Not a day's production was lost. And so it was for the entire year of what became known as the Wapping Dispute. 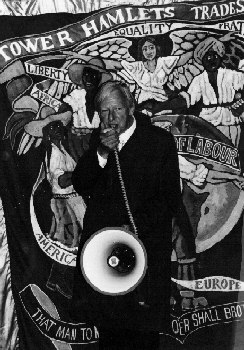 In support of their dismissed members, the print unions organised regular marches and demonstrations at the company's premises. They also called for a boycott of the four newspapers involved. Their actions were generally lawful and dignified, although passion and politics sometimes fanned a wider span of responses from some of their supporters. As the dispute gathered momentum and the possibility of a blockade of the exit from the Wapping plant started to look more likely, however temporarily, a large-scale police operation was mounted to ensure that News International could operate without any disruption.

In February 1987 the strike finally collapsed. With it the restrictive trade union practices associated with the traditional Fleet Street publishing empires became unsustainable and the Trade Union movement in Britain was irrevocably changed. The actions of News International and its proprietor, Rupert Murdoch, together with the EETPU and the police, were widely criticised. In particular there was outrage at the heavy-handed policing and the wholly partisan support that Murdoch received from what the strikers dismissively termed his "paperboys". Virtually anyone in the vicinity of the plant, including local residents, were assumed by the police to be sympathetic to the case of the strikers. The people of Wapping were frequently denied access to their own streets and even their own homes, and had their cars towed away from legitimate parking spaces to allow TNT juggernauts to thunder at speed, unhindered, through Wapping's back streets. Away from the cameras and crowds, strikers and their supporters were frequent victims of nothing short of officially-sanctioned thuggery. I personally saw many people viciously assaulted by the police or arrested on trumped-up charges, and witnessed a succession of policemen committing perjury in court on an almost industrial scale. From what I saw magistrates never questioned uncorroborated evidence given by the police. Documents now available under the 2000 Freedom of Information Act record that the leadership of the Police and the Home Office congratulated themselves on the high conviction rates associated with "the Murdoch dispute", invoked a "public interest" in ignoring complaints and worried about the effect on morale if cases of perjury, perverting the cause of justice or assault were pursued against police officers. And none ever were (although, ironically, Deputy Assistant Commissioner Wyn Jones, who led the policing of Wapping, was subsequently convicted on an unrelated incidence of shoplifting in 1995). 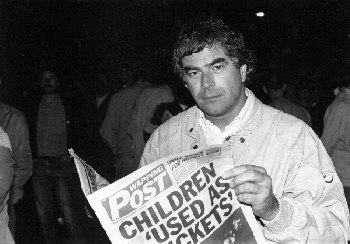 The Wapping Dispute really was a dispute with heroes and villains, although the fault lines were not always clearly delineated. There were acts of vandalism and intimidation committed by some of the printworkers and their supporters, albeit on a relatively small scale. Many of the local police struggled valiantly to maintain good community relations, even as their colleagues drafted in from elsewhere acted to destroy them. The working practices perpetuated by both management and unions in Fleet Street had been appallingly corrupt and Luddite for years - Fleet Street union members were not always popular even in their own unions. However, in Murdoch we saw a manipulative and determined risk-taker redefine the plumb line of the gutter. And it is not without good reason, sections of Fleet Street were known as the gutter press - with few exceptions, the journalists and photographers from both Murdoch's titles and elsewhere had behaved in ways that often left a very unpleasant impression of their professions; it was clear that it would not necessarily be from their ranks that the champions for a more responsible press would emerge. And while a few brave politicians had stood up for transparency and even-handedness during the dispute, many had long since been cowed or compromised by Murdoch's henchmen. Those that weren't soon would be, as Murdoch pursued an unrelenting, bullying campaign through his titles against those who did not acquiesce. This was probably the greatest legacy of the Wapping Dispute, not that the inevitable march of progress would ultimately prevail - that was never in question - but that press workers, police and politicians could so easily became compromised by one enterprise's pursuit of profit. 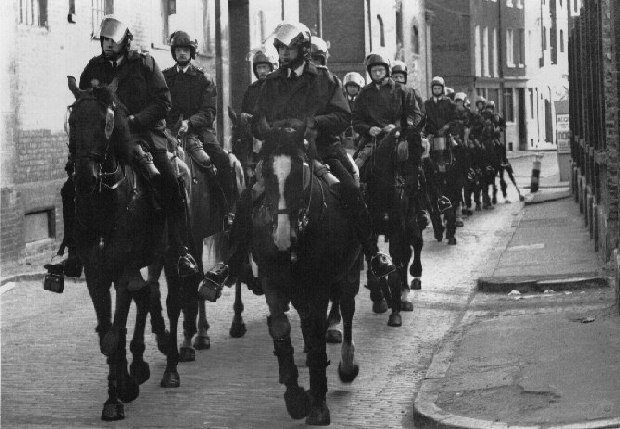 More Pictures from the Wapping Dispute