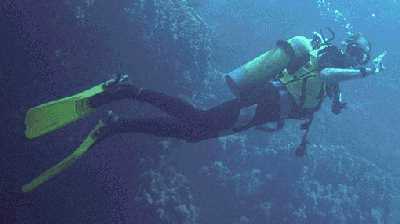 About 350 kilometres east of the the most easterly point of mainland Brazil lies the islands that make up the archipelago of Fernando de Noronha. It's difficult to get there and conditions are relatively primitive when you get there, but it's worth the effort. It has pretty consistent air and sea temperatures all year round up in the high 20s centigrade and viz that can exceed 50 metres. There are some excellent dive sites, perhaps not all worth the round trip in themselves but this is a unique place to visit. Remarkably there is a dive outfit on the island, although I dived with the charming Patrick Muller who runs a hotel and diving on the mainland and was starting to expand his operations at that time.

There was one dive site, however, that for me stands head and shoulders with some of the best. That is Iuias, a rocky pinnacle that rises to within a few metres of the surface a few hundred yards off Ponta das Caracas. The pinnacle is just honeycombed with passages, caverns and swim-throughs, in any one of which you can find yourself passing by nurse sharks, blue sharks and lemon sharks. There are not a lot of fish here, although there seemed to be quite a few barracuda around, and the rocks are covered in soft corals and sponges. This was a dive to really get the adrenalin pumping! 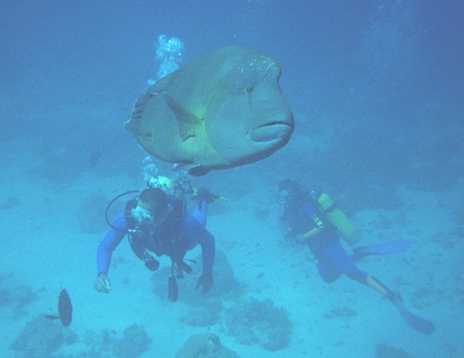 To get to Shark Reef you need to stay at Na'ama Bay, Sharm el Sheik, or be aboard one of the live-aboards that cruise around the Red Sea. This is the very tip of the Sinai, made inhospitable by the arid desert around it and requiring a special permit to visit, but still one of the world's premier dive sites. Shark reef itself is a small coral outcrop about fifty metres across with a vertical drop-off to infinity on one side and a sandy bottom that gets as shallow as about 6 metres on the other making for an almost perfect "circular tour". Sadly, the number of divers over the years has frightened off many of the sharks that could be seen here once, but there is always the possibility of seeing them and there is usually an abundance of other sealife to be seen - on one single dive here I have seen sharks, barracuda, turtles, rays, morays, crocodile fish, grouper, napoleons, and all the panoply of reef and pelagic fish you would expect in this part of the world. Truly a stupendous dive site.

There is still plenty of good diving in the Red Sea although it is sad to see the dead coral, or to be harassed by fish familiar with titbits from inconsiderate divers. Conventional wisdom has it that the diving gets better the further south you go in the Red Sea, but it is remarkable how good the diving remains throughout the region considering how many divers visit it. Virtually all dive centres and live aboards provide about the best value coral reef diving there is in the world. it is best to visit in the Autumn when the air temperatures are bearable and the seas are still warm ; typically the sea temperatures are in the mid 20s centigrade around this time. Visibility is usually upwards of 25 metres.

Last autumn three friends of mine and I piled into "The Duke" together with baby kit, diving kit and a baby and set out for Ireland via the ferry from Wales. We drove down through the Irish Republic to County Kerry, where life has a different compexion from anywhere else on the planet. Staying in Dingle, the home of Funghi the Dolphin, we dived around the area on board the Merlin Diver (a fine boat, with real toilets and the best crew you could want on a dive boat) and enjoyed the stout in the local pubs. The weather is never predictable in this part of the world, the viz is normally only a few metres and the seas rarely stray above about 15 degrees Centigrade, but this is the sort of diving which makes you know you're alive. There are some beautiful wrecks and lovely caves to dive in, but if you are in this part of the world you set your sights on the Skelligs. 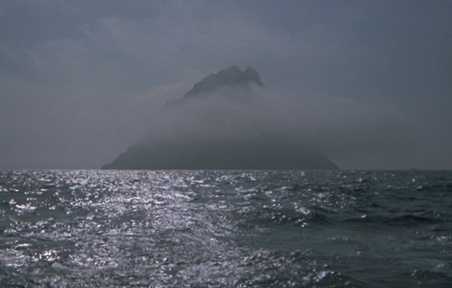 The Skelligs are two small islands that stretch sheer out of the sea a few miles off the coast of Kerry. The weather round here is unreliable, and there are not always a lot of opportunities to risk the trip out. The Lavelles have about the best knowledge of these islands of anyone, and we stayed with them and dived the Skelligs with Pat Lavelle as our skipper. It's hard to say why diving the Skelligs is so special - there isn't an abundance of sealife, although the seals can be very friendly and aren't afraid to come and give your fin a nip while you're not paying attention. I do have a vivid recollection of me and my two buddies wrestling respctively in a crag with a lobster, a crayfish and the largest edible crab I've ever seen. And I don't recall ever seeing Lobsters running freely around the seabed in open daylight. I suppose the real charm of the Skelligs, however, is diving somewhere where history and legend have an almost tangible quality.

There is good diving all along the west coast of Ireland through Donegal round into Ulster, although it is easiest to find someone to take you out on spec in Kerry. You need your own kit, but bottles and weights are usually supplied. We finished our trip around Ireland by taking the ferry from Larne in the North to Stranraer in Scotland and drove back down to Manchester, from whence we started, only a week later. Having a baby with us was never a problem - the Irish love children and accommodate them everywhere, babysitters generally come free!

The Mediterranean doesn't provide the variety and quantity of sea life associated with coral reef diving, but there are some pleasant enough spots to visit. Malta is one of them, with rocky coastlines that drop (sometimes spectacularly) to great depths fairly quickly. The weather is good throughout the summer months with a water temperature in the mid to high 20s centigrade, visibility up to 30 metres or more, and no tides.

The best way to dive Malta is to hire a car or a van, hire bottles from one of the many dive shops out there and go shore diving. There are very few of the better sites that are not accessible from the shore and everywhere is only a short drive away from wherever you might choose to stay. Note that you will need a diving permit before you can dive there though; this can be arranged in advance via a dive shop. I used Maltaqua when I last visited and found them very helpful - their number is +356 571873.

My favourite dive site in Malta was on the island of Gozo, just a brief ferry ride away from the mainland. The Azure Window at Dwejra is small pool a few yards from the sea which leads you through a cavern into the open sea at about six metres depth. From there you can explore a number of caves and arches and swim along some excellent walls. Well worth a visit.

Although coral reefs provide some of the prettiest and easiest dive conditions in the world, and despite the fact that the Great Barrier Reef is the mother of all reefs, the best diving I had in Australia was along the stretch of coast between Brisbane and Sydney. All along the Pacific Highway are some great dive sites and you couldn't wish to meet a friendlier and more helpful bunch of diving outfits, all of whom provide a dive guide, kit and accommodation at exceptionally good rates.

With Roo and Richard, who have a thousand plus dives under their weightbelt, I dived Pimpernel Rock, courtesy of Brooms Head Dive Centre, Fish Rock Cave with South West Rocks Dive Centre and Seal Rocks with the inimitable Ron Hunter out of Forster, spreading the trip over four days. As you go down the coast the sea life gradually changes from mostly tropical to mostly temperate, but you can pretty much guarantee on every dive the company of Grey Nurse Sharks.

Pimpernel Rock used to break the surface at low tide apparently, but a naval vessel ran aground on it and the top ten metres were blown off making for an excellent deco stop on this deep dive - I went down to the large arch at 38 metres but there is also a swim-through down to 45 metres.

Fish Rock is a pucker cave with an entrance and exit over 100 metres apart and a couple of air pockets along the way. The entrance has so many shoaling fish around that it's disorienting just trying to make out the walls, and once you're inside there are some tight squeezes and lurking wobbygong sharks - you wouldn't want to take down an inexperienced diver! To our delight, on exiting the cave, we found ourselves accompanied by a 160 year-old turtle back to the dive boat.

Seal Rocks has a few seals left, but it's the Grey Nurses you can't avoid here - sometimes as many as fifty or more are cruising around. These are magnificent animals, usually two to three metres in length with long sharp teeth on display and quite unlike other species of nurse sharks I've come across elsewhere. Fortunately humans are not on their menu, so they pose few dangers unless a misunderstanding arises, but you hug the rocks like you were part of them when one comes to check you out! Truly breathtaking diving, and only a part of the attractions of diving around Seal Rocks.

Why is England one of the most popular countries in the world for diving? The weather is unpredictable and the seas rarely get as warm as a miserable 17 degrees centigrade. Visibility is usually dire, or worse, and there's hardly ever any slack water. And yet there are about 100,000 qualified divers in England, and upwards of a couple of million dives are carried out around her shores (and particularly along the South Coast) every year. Why?

I can't pretend to answer that question, but I'm hooked on English diving. Taking a boat out of Plymouth Sound the 10 miles to the Eddystone Lighthouse on a fine, sunny, late summers day, seeing porpoises or basking sharks along the way, and experiencing 30 metre visibility at the site doesn't happen often - but it's not as rare as all that. Around the lighthouse the bottom is very varied down to about 50 metres, but mostly around 20 to 30 metres. There are plenty of dogfish, bib, pollack, congers, wrasse, lobsters and edible crabs to be seen and, reputedly, the remains of several ships now broken beyond all recognition. if it's wrecks you're after though, there are plenty around Plymouth to do as a second dive on the way home. A favourite in the area, possibly the most dived wreck in the UK, is the James Egan Layne - and people are still finding souvenirs of their visit around her!

In England most divers operate out of BSAC dive clubs and have their own boats, but a sizeable minority charter. Throughout England, wherever people dive, there are plenty of charter boats operating, plenty of air stations and plenty of dive shops. Hiring kit is usually a bit more difficult. Fort Bovisand on Plymouth Sound has the lot (even accomodation and a pub), and provides a shuttle out to popular dive sites in the area. 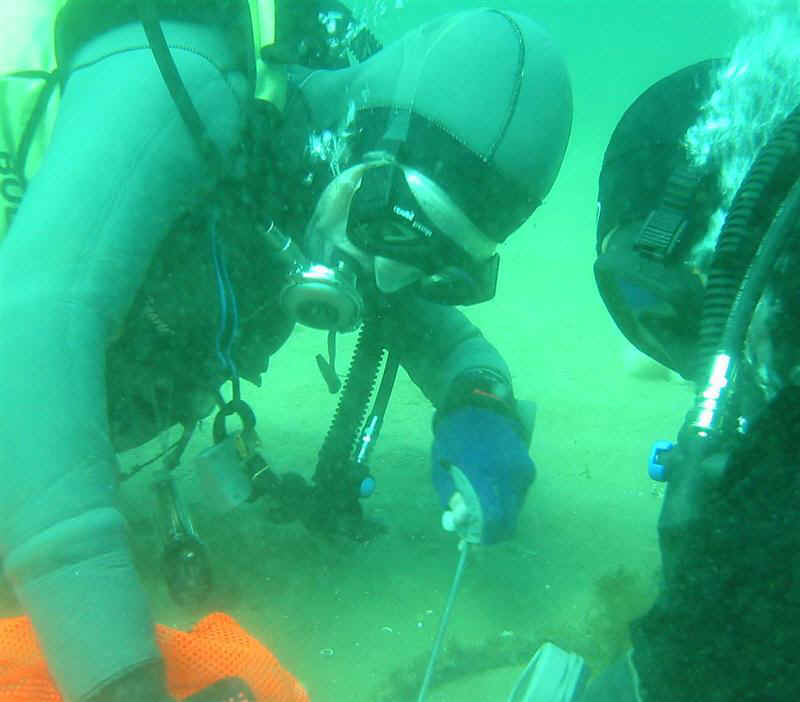